Visual artist Daniella Batsheva is a self-proclaimed “Illustrator with a design habit” whose aesthetic straddles the line between underground and mainstream. Her art boasts the beautiful detail-heavy, intricate linework of the Victorian era mixed with the dark goth imagery inspired by horror films. Softly stylized figures with deep color palettes. Whimsy with a creepy twist.

Daniella shares, “Making art is very much a compulsion for me. I can't function without creating. Art provides a way that I sort my own thoughts and feelings, so it's something that is absolutely necessary for me. The selfish side of me creates so that I can share a timeline of my life experiences by sharing the things that I find to be most beautiful. The other side of me creates because I have always felt a lack of art and visual stimulation in my surroundings, so it is necessary to contribute towards helping to beautify the world.”

Daniella grew up a horror nerd. As a kid, if her family watched movies without a touch of macabre she wasn’t interested. She explains, “I’m a bit of a thrill seeker, so horror films have always been an outlet for me. I love monsters, I love the unexplained, I love things that defy logic, and I find that in horror. It’s like when Beyoncé wanted to have an unflattering photo removed from the internet, it made people want to find the image and stare at it even more. As a rebellious teen, when I was repeatedly discouraged from seeking out “bad things,” I went in even harder. I wanted to be soaked in ghosts and goblins. I wanted nothing more than to explore an abandoned mansion and drape myself in black. Every free moment I had in high school was spent watching horror movies. Whenever I came across an old cathedral or cemetery, I would roam around, take notes, and obsessively research its history when I got home. When was this built? Why? Who’s buried there? Are there ghosts?”

While studying illustration at The University of the Arts in Philadelphia, Daniella felt stifled by the city. But by wandering the narrow, shadowy streets of what was the 19th century Red Light District and prodding the shopkeepers for stories of strange happenings and begging for entry into their secret basement passageways that run beneath, she was enthralled. After college, she moved to Los Angeles where she lived for 10 years, firmly establishing herself within the horror community. LA is where Daniella found her voice artistically and where her professional work began to really take off. When the pandemic hit, she sought refuge in Palm Desert and eventually made her way to Tel Aviv and London. In London she delighted in being surrounded by haunted history and gothic architecture. Daniella was in heaven there, and the art that poured out of her was effortless and endless.

An important part of Daniella’s process is the symbiosis between art and music. For her, there’s something psychological happening between imagery and sound. Making music is a vital part of creating a visual piece. She says, “Music helps set up the vibe I’m looking for, it fills the environment with a sound that energizes me, and it can even conjure up its own imagery that pushes my illustrations further in the right direction. Each one of my pieces has a specific soundtrack.” To that end, Daniella loves collaborating with musicians, and has done many music projects. She is the first-ever female Lead Illustrator for storied UK alternative culture brand Kerrang! – helping to usher in a new era of inclusivity through her artworks, she created tour posters and merchandise for Paris Jackson, album cover art and tour posters for The Kut’s Waiting For Christmas and more.

Daniella sees great value in being able to make everyday objects beautiful through design. She observes, “The things we choose to keep or adorn ourselves with are very often a personal statement. Having design and illustrations in our lives can make us feel a bit better, maybe stand a bit taller. I think we forget how much design is in every detail of our days. I thrive on being able to deliver something extra special where you least expect it. I have always thought ‘If there is a way to make our environment, our favorite or most used objects, more beautiful, then why don't we?’” She designed product packaging for Pizza Girl sauce, trophy design for horror film festival Shriekfest, book covers, advertisements and more.

“I want to create art so that I can contribute something beautiful. I want to have a positive impact on my surroundings. I want to create pieces that make everyday life more visually stimulating, more fun,” Daniella declares. “I want someone to look at my pieces and think, ‘I relate to that. That brings me comfort. I want to keep that.’" 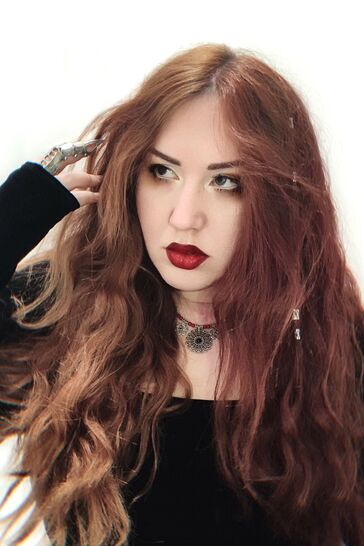